It’s kind of sad knowing that something you helped create is about to die.

Okay, that’s perhaps a little dramatic, but I found out recently that a site I helped write, (or more correctly, re-write) is about to get switched off permanently.

Fair enough too! It’s running on a platform that I was not a massive fan of, and the licence fees are extortionate. Another issue is the site has been a little neglected the past 18 months. Under-resourced and operating at far less than what I think it potentially could have been.

Back in early 2008, I was asked advice about doing an internal re-write of this student social platform. I’m always happy to offer free advice and, over a few pints, gave my 2 cents worth on how they could go about managing the system rewrite in-house, as well as an idea of the effort involved. Little did I think that I’d be asked to help implement it!

The existing site had about 300k users on it, who all needed to be migrated to the new platform. We were also restricted on technology and had to use a particular platform, which was a headache in itself. But on the 13th of July 2009, after finishing development and running the migrator, our first user signed up on the new site.

It was so exciting seeing the increasing number of sign-ups. Online users were orders of magnitude higher than the old site could support. For a while, we ran both sites concurrently. Old users were redirected to the old site after login, while new users got to play with the new site (several users registered twice, not wanting to wait). But once the client had confidence in the new release, we retired the old site and continued to watch the numbers grow. 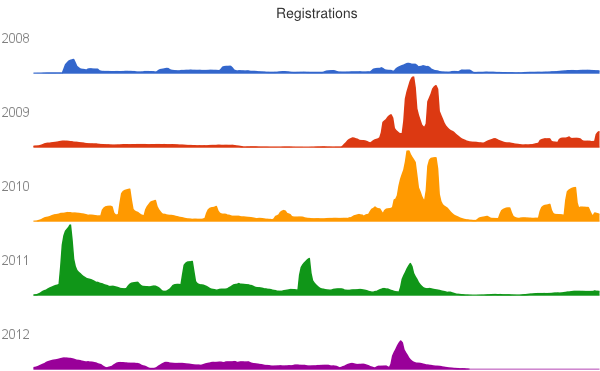 The past couple of days, I’ve downloaded the signup date for each user to produce this graph (horrible clunky API unfortunately - but there’s only 3 people online, so no impact on any users). Then grouped by day and averaged over seven days to remove some of the massive spikes, created the above chart. It shows clearly when we switched it on in 2009 (earlier registrations were based on the old system users) as well as the cyclical/seasonal user-signups which were related to school years and occasional promotions.

Considering how little love it’s had recently, it’s not actually declined as badly as I’d thought. But it’s still not profitable with the license fees they have to pay, hence the imminent power-down.

I don’t know exactly when it gets switched off. But it’s going to be a sad day for me. I loved the process of building it and value the people I worked with and are friends with them still. Part of me wishes I could have helped revive the site somewhat, restoring it to the potential I knew it had. Or even just helped stem the recent neglect. But it wasn’t to be.